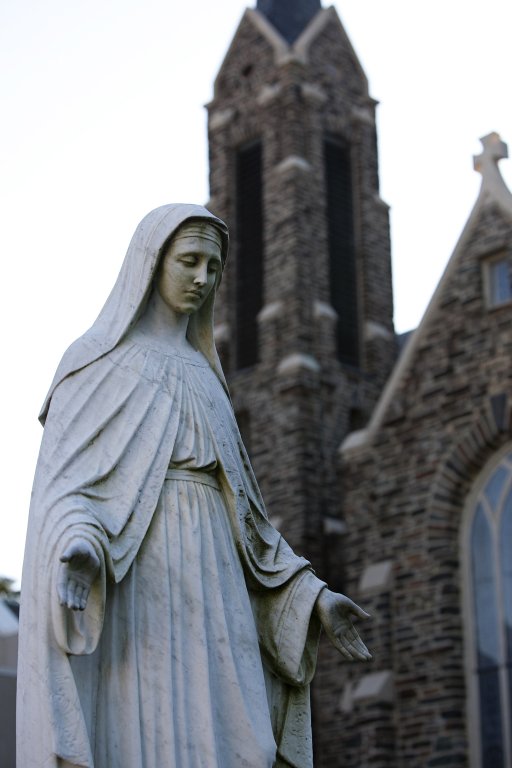 With roots going back to the late nineteenth century, Saint Leo the Great’s early parish history tells the tale of the small but faithful community of Catholics in the Winston-Salem area. After initially meeting in homes and a local meeting hall, the faithful were able to build a church in the 1890’s at the corner of 4th St. and Brookstown Ave. under the leadership of the Benedictine monk Bishop Leo Haid. Bishop Haid had been named by Pope Leo XIII as his local representative and administrator of the newly formed Vicariate Apostolic of North Carolina (not a diocese because of the relatively low number of Catholics in the area). It should come as no surprise that under the leadership of these two great Leos, that the parish would seek the patronage of a third Leo: Pope Saint Leo the Great.

With the care of the Benedictine monks from Belmont Abbey, the parish grew quickly. By 1916 plans were underway to build a new church. With the aid of the Knights of Columbus, the leading families of the parish, and many of the local Protestants, construction began in 1927 with the cornerstone for the new church building laid on January 15th, 1928. Worship began in the current church soon thereafter, despite it not being completed until 1929. Here is a list of Notable Moments in the history of St. Leo the Great Catholic Church:

1941: Saint Benedict the Moor parish is established on the eastern side of Winston-Salem.

1954: Our Lady of Mercy parish & Our Lady of Fatima chapel comes into being, each drawing their territory from Saint Leo’s parish area.

1964: Rev. Fr. Charles B. McLaughlin, pastor of St. Leo the Great, is consecrated Auxiliary Bishop of Raleigh. He continues to serve as pastor, along with taking on other responsibilities of assisting the Bishop of Raleigh. (He was later appointed as the 1st Bishop of the Diocese of St. Petersburg, Florida.)

1966: Saint Leo the Great’s reaches the milestone of 500 registered families in the parish.

1966-1971: During the second term of Msgr. Michael Begley, the church underwent renovations of: the addition of a “free-standing” altar into the Sanctuary (as encouraged by the Second Vatican Council), the addition of a baptistery, and two confessionals in the rear of the church.

1984-1985: Further renovations to the Sanctuary of St. Leo’s completed

1998: the parish purchased the present rectory located across the street from the church.

The current columbarium was blessed on November 2nd, 2001 with it and the Memory Gardens completed by November 2nd, 2002.
Saint Leo’s has continued to grow and flourish in its current location, and as of January 2021, has approximately 1800 families registered in the parish.

You can read more about our stained glass windows, including their meaning and donors here.